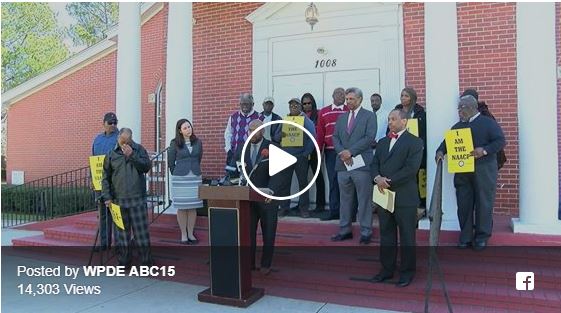 Racially Bias Traffic Loop:
All citizens are entitled to equal protection under the law and have the rights of expression, assembly and association,” said NAACP President and CEO Derrick Johnson. “The City’s traffic plan and overly aggressive policing tactics during Black Bike Week violate those fundamental constitutional rights. The Association will continue to use the courts to fight such blatant discrimination.”

According to the complaint, the City of Myrtle Beach and its police department impose no formal traffic plan during Harley Week. However, during Black Bike Week they restrict the main two-way thoroughfare, Ocean Boulevard, to a single lane of southbound traffic. All vehicles entering Ocean Boulevard at night are forced to travel through a 23-mile loop with just one exit. On Saturday night of Black Bike Week, it could take over six hours to complete the loop.

The complaint also alleges that the City deploys far more police officers during Black Bike Week than Harley Week and that the police officers utilize overly aggressive policing tactics against African Americans. As described in the complaint, the City seeks to make Black Bike Week sufficiently unpleasant for the mostly African-American motorcyclists, hoping that they stop attending the event and that it ceases to exist. The NAACP believes the city and police are attempting to deter African Americans tourists and bikers from visiting Myrtle Beach.

“All citizens are entitled to equal protection under the law and have the rights of expression, assembly and association,” said NAACP President and CEO Derrick Johnson. “The City’s traffic plan and overly aggressive policing tactics during Black Bike Week violate those fundamental constitutional rights. The Association will continue to use the courts to fight such blatant discrimination.”

In 2003, the NAACP successfully challenged the City’s previous traffic plan for Black Bike Week. In 2005, the district court granted the NAACP’s motion for preliminary injunction, finding that differences in the traffic plans between Black Bike Week and Harley Week were likely motivated by race and in violation of the Fourteenth Amendment to the Constitution. Shortly after this decision, a settlement agreement was entered requiring the City to impose the same traffic plans for Black Bike Week and Harley Week. However, in 2015, after that agreement expired, the City imposed a new traffic plan even more restrictive than the 2003 plan.

“The Court found that the earlier plan was likely motivated by race and now just a few years after the consent order expired, the City has come back with an even more restrictive plan; it is clear that the City is once again discriminating against the African Americans who attend Black Bike Week,” said Reed Colfax of Relman, Dane & Colfax PLLC, which represents the Plaintiffs.

“During annual Black Bike Week, the City of Myrtle Beach and its Police Department resort to behavior that subjects African Americans to rules and restrictions that are clearly racially motivated,” said Kristen Clarke, President and Executive Director of the Lawyers’ Committee for Civil Rights Under Law. “This draconian set of rules and restrictions don’t apply during Harley Week, the Country Music Festival or during other major public events. By subjecting African Americans who travel to Myrtle Beach for Black Bike Week to second-class treatment, officials are resorting to conduct from a bygone era. With our lawsuit, we are turning to the courts to protect the rights and dignity of those seeking equal treatment under the law.”

“White bikers do not have to go through that, so why should we?” said individual plaintiff Simuel Jones, a Black Bike Week attendee and former U.S. Marine.

Find a copy of the complaint